The Shadow of What Was Lost 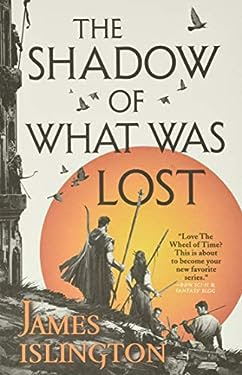 The cover says "If you like Robert Jordan.. You'll like this"  and they aren't wrong.  In fact, at times I felt like I was reading Robert Jordan's story from the Wheel of Time.  However, it was still an enjoyable tale with interesting characters and plot twists.

The book flew by.  It's exceptionally easy to read.  I have some "niggles" about the book where things are too easy and too clean - but it was still a decent story and I'll certainly read the remainder of the series to see how it concludes.  I'm particularly glad it promises to be a Trilogy and not an epic saga.  I don't know if I would be as interested in 14 volumes.

Even though the basic story seems to be "a group of teen-aged friends, are, coincidentally really special and are set on a task to save the world from an ancient evil that is trying to escape a magical trap" the story is unique enough that you should enjoy it.

The three primary characters, Davian, Ashe, and Wirr, are all well written, interesting, and likable.  The "2nd billing" characters are also interesting though, for the most part, Islington doesn't seem to be really interested in making any character super "unlikable".  Even when he starts out with a petty brat the petty brat fairly quickly evolves into a decent guy.  Other attempts at caustic characters are also resolved a bit too quickly for my liking.

The mysterious Caeden promises to be the most interesting story-line in the book as bits and pieces of who he is get slowly revealed throughout the story.  The foreshadowing is often pretty obvious but it doesn't really detract from the story.

I'd probably really rate this at 3.75 instead of 4 stars but don't want to punish it with a 3.

I think to really improve the series Islington needs to make it feel like the characters really "feel" their hardships.  So far even horrific things just seem to be emotionally easy for each to deal with and extraordinary challenges are resolved a bit too simply and conveniently.
Posted by Unknown at 9:07 AM