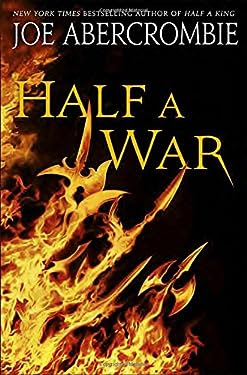 Well it's been a long time since I posted a book review here.  However, I received an advanced review copy (ARC) of "Half a War" by Joe Abercrombie in late June so I figured I should both read it and review it.

I'm still not sure why I was selected to receive the ARC but I'm glad I was.  I had already read the first two books in the series, "Half a King" and "Half the World" and I had fully planned on reading this one anyway so it was kind of nice to get it for free.  So there is your disclaimer; I was compensated a copy of this book before I ever wrote this review.

As with each of the prior books in the series the primary characters are young, about 17, and the story is told from from their perspective.  In "Half a King" the primary protagonist was Yarvi.  Yarvi continues to play a prominent role in "Half the World" but the focus moves to two other young characters in Brand and Thorn.

The same pattern holds true with "Half a War."  Yarvi and Thorn are both featured in this book (and Brand in passing) but two new young leads appear to take us through this final tale in the triology - Princesss Scara of Throvenland and Raith - a berserker warrior from Vansterland who has sworn fealty to Grom Gil Gorm.   In addition two these two a younger character from "Half the World", Koll, plays a more prominent role as he has reached the correct age (around 17) to be one of the protagonists.

"Half a War" is the conclusion to the story that started in "Half a King" and as such it continues to be focused around the slowly building war between the Grandmother Wexen and her puppet the High King and the nations of the north; Vansterland, Throvenland, and Gettland.

Abercrombie does a nice job, as usual.  I really enjoyed the pacing of the book and his harried descriptions of battle from the berserker perspective of Raith is really good; in fact he does one of the best jobs I've seen of capturing the breathless feeling of blood raged battle.

Skara is a little dull at times and, while she is described as having deep cunning I felt like her character was a little flat and uninspired through most of the book.   She improves some as the tale progresses - but overall I felt like Abercrombie missed a chance to develop a really interesting character.

I thought it was interesting how Raith is shown to evolve over the course of the book but much of his evolution seemed rushed and unlikely considering his nature at the start of the tale.  I appreciate that Abercrombie doesn't drag the book out forever but Raith's growth seemed unrealistic considering the apparent time frame of the book.

Overall I enjoyed the book quite a bit even though I think, perhaps, it was the weakest of the three.  I probably liked them in descending order as a series even though I liked Thorn and Brand more than Yarvi, Yarvi's story in book one was probably the most interesting.