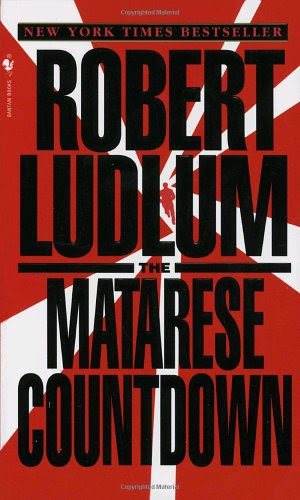 This is the first Robert Ludlum book I've read and I went into it with somewhat high expectations considering how well known he is. My expectations were not met. The story is okay but his writing style; particularly his dialog, really just didn't feel right to me. None of the dialog between any of the main characters seemed believable. For example, at times one character would say something and the initial response would be heated and angry but then, almost immediately, the angry character would cool off and realize they were being ridiculous. I could understand if one of the characters had that pronounced of mood swings in a conversation but it seemed like every character went through the same rapid shifts.
The interpersonal dynamics of the "couples" was really odd too. People who seemed, through the course of the book, to not interact that much, shouldn't suddenly be calling each other "My Darling". It just seemed like Ludlum really wanted to force a romantic element into the story so he did even though the female half of the couple was very remote until the spark flew and the male half even admitted he had never had interest in having a real relationship. Their sudden pairing just felt contrived and didn't really add anything useful to the story.
Some of the elements in the story - the actual Matarese conspiracy - were pretty interesting and they seemed to be pulled right from our current geo-political environment. The conspiracy itself seemed believable and the "villains" while not particularly nefarious were generally believable even if they were very shallowly drawn.
Overall The Matarese Countdown just seemed to skim over the actual plot and the conclusion seemed a bit too forced and clean for what is a tale about a worldwide financial conspiracy.  I rate this a 2/5.
Posted by Unknown at 5:06 AM No comments:

Email ThisBlogThis!Share to TwitterShare to FacebookShare to Pinterest
Labels: 2, thriller 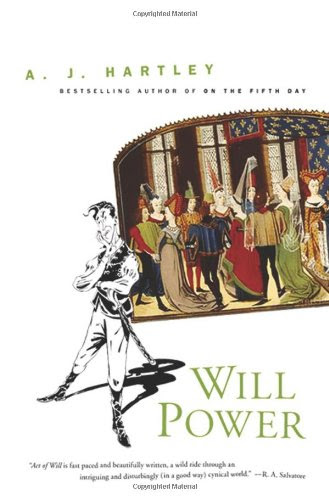 Much like the previous book in the Hawthorne Saga, Act of Will, Will Power is a light and fun read. It continues to follow the adventures of William Hawthorne. By the time you pick up this second book you've decided you like Will otherwise you probably wouldn't have grabbed this book. Will is an unusual and reluctant hero - more reluctant that most reluctant hero's really. However, he is also oddly brave for someone who claims to only be interested in keeping himself alive.
This episode of the saga has Will and his adventuring friends entering a different nation filled with bear riding Goblins that are at war with a majestic and beautiful city full of majestic and beautiful people. Almost immediately Will and his friends get split up so that Orgros and Mithos, the two main warriors of the party are lost, and Garnet and the Party leader are also missing which just leaves Will and Renthrette to navigate the war and to figure out a way to survive and return home to Stavis.
Nothing about the book is particularly suprising as you read it but Heartley spins a fun tale and Will manages to do some amazing things in spite of himself. If you're looking for a quick and fun fantasy novel or series then this book, and the Will Hawthorne Series should be right up your alley.
I actually liked this book a little better than the previous even though there are some scnees where I think Will's friends are unreasonably hard on him that annoyed me. I give this book a 3.5 out of 5 rating.
Posted by Unknown at 5:33 AM No comments: 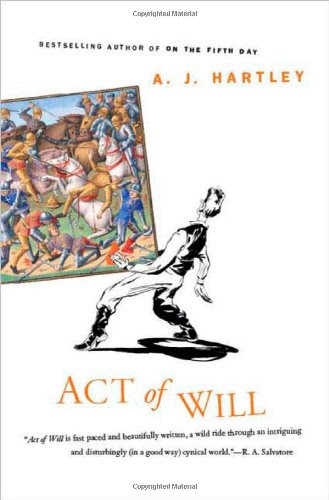 Act of Will is a fun book. Will is as unlikely of a hero as you'll find in the fantasy genre. The book starts with him hoping to become a full actor in his company because it is his eighteenth birthday but things quickly fall apart for Will and he finds himself on the run and in the company of some true adventurers.
Will has a lot to learn on the road not only about adventuring but about the world, women, and himself.
Honestly there is nothing particularly unique or original in the overall story or the tropes used however it's still enjoyable. Will is an oddly likable character and his companions are all sort of interesting though A.J. Hartley could have developed them all quite a bit more.
If you're looking for an enjoyable and light read then this is a great book to go with.  I give it a 3/5 rating.
Posted by Unknown at 7:25 AM No comments:

Stonewielder: A Novel of the Malazan Empire 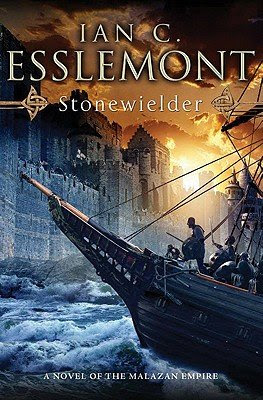 I have enjoyed all of my forays into the world of Malazan and this trip, with Stoneweilder, is no different. Sure, the timespan being covered is much smaller than in some books and some of the main characters are new to me, but I still felt comfortable delving into the isles of Fist and learning about the battle with "The Lady" and the eternal battle with the Riders along the storm wall.
I don't really have a favorite author between Esslemont and Erikson but I do like when either of them touches about the Crimson Guard and Esslemont seems more likely to do so and this book carried on that tradition. Sadly, however, there wasn't enough Crimson Guard action in the book for me - though you do get a very graphic idea of just how bad-ass Iron Bars is. Let's just say it is gripping.
A few characters we have been previously introduced are key protagonists in this book as well but some of the story lines aren't resolved at all by the time the book ends so it felt weird following them for so much of the book only to discover they didn't really tie into the main story arch of the novel at all. Also, because of the way Malazan books are written you may already know the end to at least one arc before you read this book.
My only other gripe about the book is that it seems to change perspective too often. In fact had he just left one of the unresolved story arches out of the book I feel like the entire thing would have been cleaner and more focused.
Regardless of my issues with changing point of view the book was a fun read and I recommend it to anyone that enjoys the genre.
Posted by Unknown at 6:09 AM No comments: 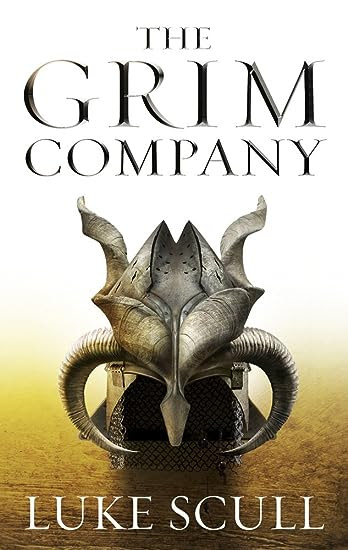 In my "in progress" review of The Grim Company that I wrote on Goodreads I said:

"It's pretty fast paced and has some fun and interesting characters; though I honestly have trouble caring about one of the main characters; he's too shallow to be believable.

I like the magic system and am curious about the history of the world that the magelords don't want to think about."

My opinion really didn't change as I finished the book.  The style of the book is very similar to an Abercrombie tale; fun, violent, fast paced, and containing a tough grizzled veteran.  In fact one of the primary characters reminds me quite a bit of Logan Ninefingers from Abercrombie's works - except this guy has all of his fingers.

This was one of the fastest reading books I've picked up in a while.  The language is all pretty concise and it was satisfying to hit such major plot points all within one novel as opposed to the trend of most modern fantasy to wind out of control into seven or eight volumes.   In fact, so much happens in this book I imagine the next two in the trilogy will be incredibly exciting.  I look forward to more of Scull's work.
Posted by Unknown at 6:06 AM No comments:

A Memory of Light 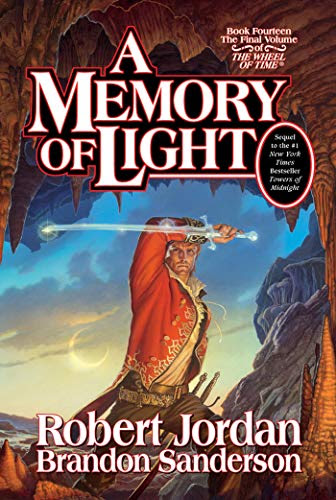 The wheel has come and gone and come again and finally the story is told. It isn't the story but it is a story; a story of how a collection of people from a small rural village were fated to face the dark one and his minions in a battle for the world.
Fourteen books and tens of thousands of pages later the story has reached a conclusion and, quite frankly, I'm glad to be done with it. Sanderson had a yeomans task to try and save this series and he did a remarkably good job of it. Sadly, however, there were so many odd story lines floating around that he couldn't possibly have resolved them all in a satisfactory manner. Instead, some come to an abrupt end and others are left dangling and waiting on a conclusion in the readers imagination.
The primary story arch reaches a conclusion that is both satisfactory and lacking at the same time. Though, honestly, it would have been near impossible to conclude the story between Rand and the Dark One in a satisfying way. At least it is done.
The most consistent part of the transition between the two authors has been that a variety of the characters annoying quirks have remained incredibly annoying. Elayne and Egwene still seem to think they know how to do everything better than anyone and Rand is still moping around and whining about how every death in the world is his fault. I've never really understood how these maybe 20 year old people feel like they know the answer to everything. Granted, I was once twenty and probably thought I knew everything as well - but I was also never tasked with saving the world and thrust into situations that were exceedingly beyond anyone's knowledge - but it still seems like the main protagonists could look to some other people, on occasion, for some advice and guidance.
My favorite character in the series has been Mat. And, in general, he is still a fun character to follow but his dialog hasn't been nearly as entertaining or laugh inducing as it was under Jordan's care. Perrin, another popular character, is also in this book quite a bit and, finally, he isn't as whiny or mopey as he has been in the prior books. Both Rand and Perrin seem to be burdened with Catholic like guilt all the time and it was refreshing to see Perrin shake free of it in this book.
Finally, there is a little twist surprise to the ending. I won't talk about it anymore than that other than to say I am not a fan of it.
Posted by Unknown at 11:14 AM 1 comment: