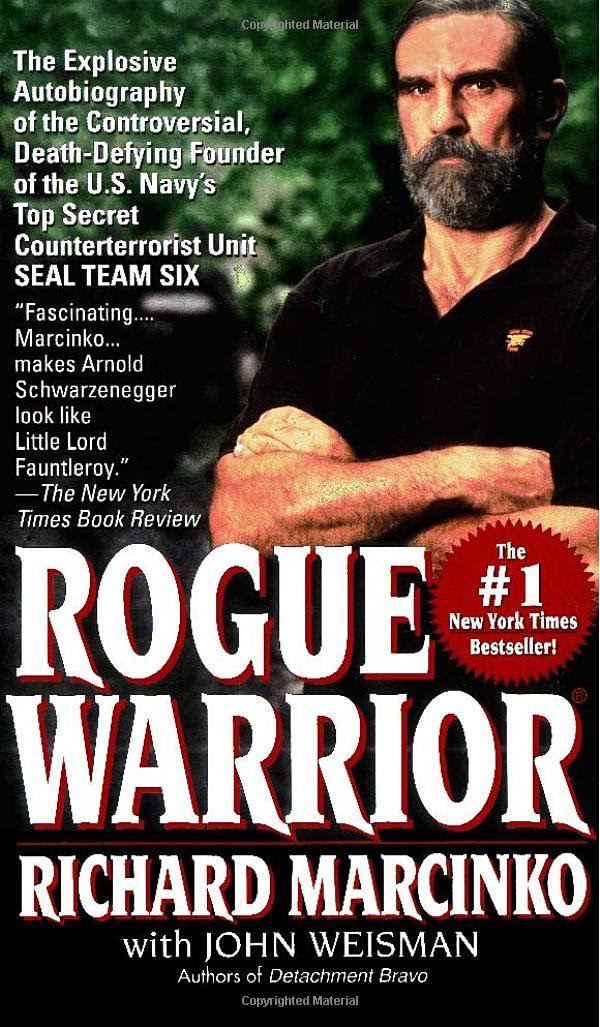 Badass. That's about the only way to describe Richard Marcinko a retired Navy Seal and founder of the most elite team of Seal, 6. Well, badass, reckless, and full of himself. However, I can forgive him his insanely high opinion of himself considering some of the stuff he accomplished during his long, but often troubled, military career.

When I was in the Army I really, really, wanted to join the Special Forces which is sort of like the Army's version of Seals. However, I didn't and that alone is a big difference between myself and Marcinko. When he wanted to do something in he went after it full bore and nothing would get in his way; including regulations and/or his chain of command. In fact, his utter disregard for his chain of command turned out to be his downfall.

This book was full of hoorah stories that really pumped me up and, quite honestly, inspired me to be a bit more kickass myself. Mr. Marcinko really does have something postive to teach everyone even if his approach to doing it may turn off many readers. He writes much as he talks; like a sailor so if rough language is a problem for you get over it. He worked in a world where death was a constant possibility; a few fucks scattered around really isn't too bad in comparision. No matter your background you should read this book simply to experience the raw power of a personality as strong as Marcinkos.

As bad ass as he came across he is also extremely selfish and, at times, deluded into thinking everything that happened to him, or his troops, was someone else's fault. First and foremost he was a horrendous husband. He sort of admits to it but at the same time he also doesn't seem to have any remorse for his overall neglect of his family. In fact, he seems proud of it. He also tended to act with his own sense of glory in mind rather than the welfare of his troops. Now, it may be that this is just a part of the SEAL psyche I can't understand; but, when his decisions as a leader led to his troops being in unnecessary and extreme harms way he just blames others for not supporting him. He never seems to realize it was his decision that put his boys up against 100 north Vietnamese on the night of the Tet Offensive for example. Instead he blames an incompetent and drunk Special Forces commander.

Marcinko does give good credit where it is due however and he frequently cites soldiers he served with who helped him or made him a better soldier. However, no matter how much those other guys tried to teach him there were some things, like tact, that Marcinko never learned; and it was this lack of tact; along with his disregard for the chain of command, that ultimately killed his career.

A prime example of his lack of tact comes late in the book when he is leading the super secret, bad ass team called Red Cell. These guys have what, to me, seems like the greatest job on earth. They are tasked with testing and breaking the security of naval installations around the world so that those bases can learn and improve. However, in his reports to the base commander's Marcinko doesn't care how he tells the commander that his post is screwed. Instead he just slams the guy regardless of the ego he is dealing with. I would think that in 30 years of naval service he would have learned he wasn't the only proud sailor around. I'm not saying that he should have softened his message but he certainly could have delivered them in a much more convincing manner. Instead he was an ass.

The ends may justify the means; but by delivering his message like a jerk he hurt not only himself but he undermined Red Cell's mission. Sure, the base's security flaws were illuminated but they certainly weren't addressed because the post commander had his feathers ruffled and he would turtle up and attack Marcinko instead of accepting the evaluation as a critique of the post and not of the commander. I don't know if I could have handled it any better but, considering the job he had, I certainly would have tried.

In the end Marcinko was still an excellent soldier who did his job, taking out the enemy, well and I'm going to try to take away some of his strengths from reading it. From now on, when I'm faced with a difficult obstacle that I think is too great to overcome, I might even ask myself, "What would Marcinko Do" - then I'll run through the damn thing and kick it's ass.

Even with all his failings and the books often awkward writing I enjoyed it and give it a 3.5 out of 5 star review.
Posted by Unknown at 5:24 AM