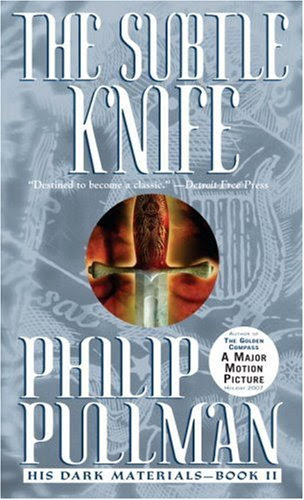 I flew through this book even though in one critical way it disappointed me greatly; Lyra didn't seem as confident in herself nor as bold in this chapter of the trilogy.

"The Subtle Knife" takes place on three worlds; the first is the same as that which dominated the first book. The second is the Earth we are familiar with and the third is a planet that is haunted by Specters that drain the spirit from adults they encounter.

In neither our world, nor the world of Specters, do the humans have an animal companion as in the first world - yet Lyras' Pan does not disappear even though all the people she meets elsewhere have their spirits within themselves. It's an odd inconsistency considering the one person we end up meeting in Lyra's home world who was from Earth has an animal companion.

This volume stars a young boy, just older than Lyra, named Will who serves as her fighting protector and guide when she visits earth. Will is an interesting character who has his own very unique story and he adds an interesting twist to the overall tale being told but the focus on Will, at Lyra's expense, disappointed me after having Lyra presented as such a strong character in "The Golden Compass."

To be honest this book did nothing towards helping clear up the alignment of the motives of Lord Asriel. While, I'm intrigued with the concept of destroying "God" I'm just not sure if Asriel's motive is a good one. I'm anxious to read book three, "The Amber Spyglass" to see the resolution.