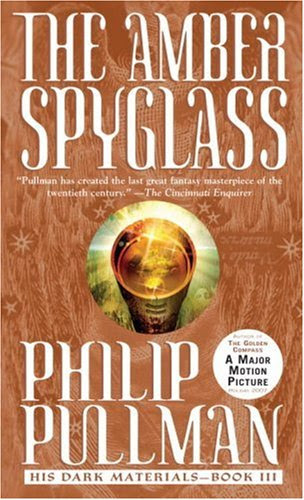 The third installment of Pullmans' "His Dark Materials" is, by far, the longest and, at times, it sort of felt like it was a little too long. However, I still enjoyed the story and, in a rare act for a bit of fiction, it left me thinking.

Typically, when I read a novel I just go into it for the entertainment and the escape. I don't try to analyze or dig deeply into the hidden layers of meaning however Pullman makes it almost impossible for me not to think about the allegory that his entire series seems to act as.

For the time being, however, I'll ignore all of that and just point out one nit in the story that really bothered me. How did Mrs. Coulter get Lyra and herself all the way to a cave in the Himalayas so fast? She didn't have any kind of special equipment or magical devices and yet she was able to get somewhere far away in, what seemed like, a day. Meanwhile, Will, with his magic knife had to travel for weeks to reach the cave. It honestly didn't make any sense and that disconnect bugged me throughout the entire book.

One of my favorite parts of the series was the fact that Pullman never really let you know if Mrs Coulter or Lord Asriel was really good or bad. In fact, I detested both of them throughout the series even though they seemed to have completely conflicting purposes. At least Asriel's demaon was likable but perhaps that was because we barely got to know it - meanwhile Mrs. Coulter's monkey was easy to dislike. Throughout the series I kept waiting to learn some secret about that Monkey and Mrs. Coulter so I was a little disappointed when it was all said and done.

It is easy for me to overlook my problems with the story though and just say, "I liked it." I hope to get my daughters to read the series at some point even though Lyra became a weaker and weaker character as the story unfolded.