Lamb : The Gospel According to Biff 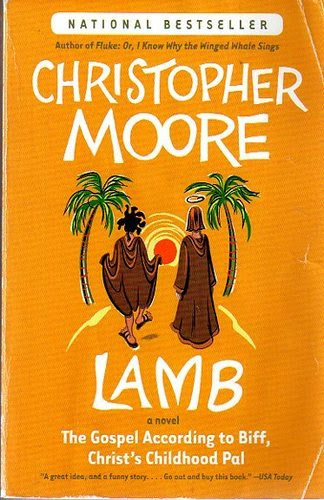 Christopher Moore's speculative history about Jesus' best friend from childhood, Biff, is a pretty light hearted tale that explores the first 30 years of the Christ's life - through the eyes of a smart-alecky Jew named Biff. Well, Biff's his nickname but it suffices.

If you are easily offended by the thought of Jesus saying some bad words don't read this book; he doesn't do it often, but, really Jesus is portrayed like any kid with the exception that he knows he is supposed to save us. Thus, at times, Jesus lives vicariously through Biff. Jesus can't have sex? Well, that won't stop him from encouraging Biff's exploits and then hearing about it afterwards. Likewise, Jesus can't persue an earthly relationship with Mary Magdelene - so Biff does in his stead. I won't spoil how that works out but you can be certain Biff can't live up to Jesus.

The story is told as if Biff were writing his own book of the Bible, though with much more modern language and, for the most part, the tale revolves around Jesus and Biff seeking out the three wise men who visited Jesus' manager when he was a baby. Each wise man has some stuff to teach Jesus (and Biff gets his own lessons along the way) until, finally, they return for the fateful day where Jesus is captured, then crucified and dies.

I know, Jesus rises from the dead 3 days later - Biff's story doesn't get into that but it does tell you what the "H" stands for in Jesus H. Christ.

Overall this was a fun read but not as good as I had hoped. While parts were funny I can't think of any laugh out loud moments; something I was expecting based on all the cover blurbs.

Email ThisBlogThis!Share to TwitterShare to FacebookShare to Pinterest
Labels: 3, historic-fiction