The Lies of Locke Lamora 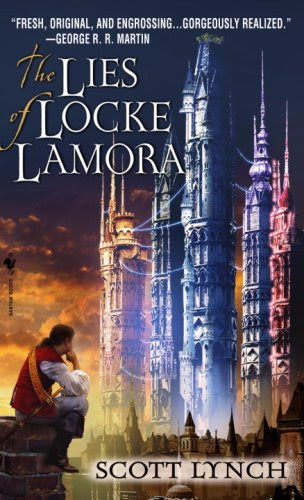 Honestly, I've always had a preference for roguish characters so when I found this book I had was pretty excited to get to it. Fortunately, Scott Lynch didn't disappoint me.

The Lies of Locke Lamora follows, in a twisted path, the evolution of Locke from a small, but crafty, orphan into a skilled thief and con man. Locke is an immensely likable character that I couldn't help but root for throughout his trials and tribulations. Thankfully he is also teamed up with some equally likable fellow such as his master "Chains" and his friends Jean, Bug, and the twins Carlo and Galdo.

The majority of the book is focused on Locke's adult life however there is some time spent giving the reader a better feel for how Locke thinks by illustrating some of his childhood schemes as well as much of the skills that Chains teaches the rag tag band of thieves. Chains, it seems, dreams of smarter thieves who get their prize handed to them instead of thieves who have to take their prize from their mark. To that end Chains teaches the boys a variety of languages and dialects, math, reading, writing, proper etiquette for a variety of scenarios, the arts of disguise and cooking, and much much more. Most importantly he teaches the boys to think and to work together - the two skills that help them get out of more than one troublesome situation.

Not only are the primary thieves likable characters but the primary targets of our thieves are also interesting and, quite frankly, likable as well. However, not everyone in the story is a charming and endearing person. Locke (and quite a few others) have their own sets of enemies to deal with and these various "bad guys" add an additional dimension of intrigue to the overall story arch. I was happy to be surprised by the outcome of a few different scenarios during the book and equally happy when those scenarios led to even darker turns in the story.

Supposedly this is the first book of seven. Hopefully Lynch manages to keep the level of his story telling and character development to the high standard he debuted with. If so Locke and Jean could supplant Fafhrd and the Gray Mouser as my favorite pair of miscreants in fiction.
Posted by Unknown at 3:01 PM

Interesting. Haven't read this but will include it in summer reading. thanks