Toll of the Hounds 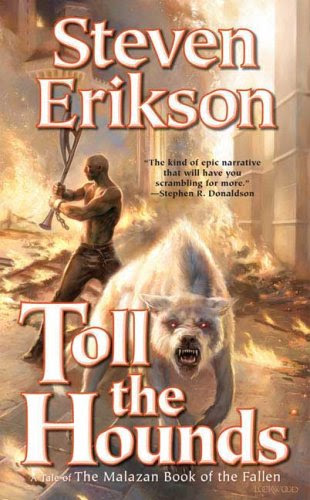 I was pretty excited to get this book; not only was it the next installment in the Malazan series but it was well reviewed by just about everyone in the fantasy blog-o-sphere last year. However, even though this novel was by Erikson (my preferred author of the two) I found this book a chore to read.

Most of my problem with this tome was the way Erikson changed the point of view (POV). It's pretty standard fare to have multiple POVs throughout and, typically, I like that device. However, Erikson seemed to bounce between a pseudo-first person perspective and then a third person perspective that I found really off putting. Adding to my overall level of discomfort Erikson decided to wax poetic far more often in this book and, at times, it seemed as if he were babbling on paper rather than telling the story.

Some of the story arcs that were followed were interesting and seemed to offer a lot of promise but, overall, I thought they all fell short. A lot of time was spent with a small group of Tiste Andii led by Nimander as they accompanied Clip toward a meeting with Rake. Yet, the group's story never seemed very compelling to me and, frankly, I could have dealt without their inclusion in the book. By the third entry related to this small band I was already inwardly groaning that I had to read more about them; each scene just seemed like a repetition of the one before it.

My favorite character, Karsa, was also in this book and, it seemed like, there was a lot of potential for him as well; but overall he seemed to be glossed over.

The whole book just felt disjointed and poorly planned; even the climactic scene seemed to be missing something. It was weird putting down a book and not wishing it wasn't done. Hopefully the next edition in the story improves.
Posted by Unknown at 5:07 AM No comments: