The Return of the Crimson Guard 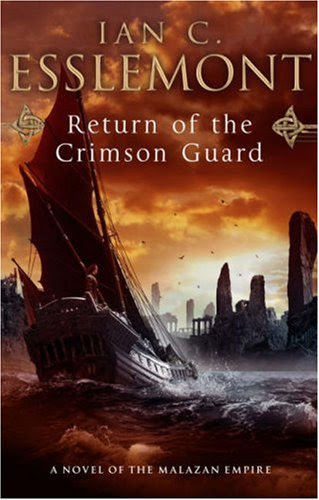 Ian Esslemont rejoins the Malazan fray with his second book, The Return of the Crimson Guard. In this edition he tells of a huge sequence of battles on the continent of Quon Tali. While the premise promises a ton of vicious action I think the book failed, somewhat, to deliver.

It's hard to not compare Esslemont's work to Erikson's so I'm not even going to try. instead I'll compare and contrast the two through this review.

Both authors create interesting and likable characters and, I think, both do a much better job of showing an amazing level of equality between the sexes. Both genders stand alongside each other and fight for their causes without either becoming obnoxiously stereotypical. I always thought Robert Jordan's efforts at describing women as equal just turned them into annoying one-dimensional harpies who think they are the only ones who know anything. Both Esselemont and Erikson do a much better job of showing an egalitarian empire in Malazan (heck, even in most of the socieities the Malazan's encounter). It's pretty cool. However, even with that said both fail miserably at creating a convincing female leader in these cultures.

Empress Laseen, aka Surly, is a prime example. She is, without a doubt, a bad-ass just like any of the other uber-hero's we see in the series. However, neither author gives her much depth. In fact, except for the martial prowess attributed to her in this book she was basically just a cold and aloof leader who didn't share any of her opinions or thoughts with anyone. She seemed a carbon copy of Tavore Paran - the Adjunct of the 14th army. Both are quiet, cold, ruthless, and completely unknowable. It's a shame because I'd like to know these characters a lot better; especially considering how critical to the overall story arch they both are.

However, in their defense, neither author has really spent much time developing any of the male leaders either. Instead, we typically only get to know the low level getting dirty characters. Granted, some of these guys are incredibly powerful and will, eventually, do some serious damage but they aren't leading entire armies; though, at times, they may be leading far more people than they ever imagined they would.

It is these nitty-gritty characters that make this series so interesting. In "The Return" we get characters such as Naif and Hurl who both find themselves in circumstances far more monumental than they ever imagined. I was, however, disappointed that the first Crimson Guardsman we ever met, Iron Bars, was so poorly used in this book; we barely got to know him. However, I have high hopes that he will reappear later.

If you like the more bad-ass characters that just wade through a crowd in destruction mode then there is plenty of that for you in this book as well. Some of them, such as Ho, are subtly so, but others; such as Rell, Urko, Braven Tooth, Temp, and Traveller are all in your face ass kickers. Sadly, Esslemont doesn't really describe combat in as compelling of a way as Erikson. Most of the one-on-one combat sequences seem to be missing a level of detail and the descriptions, at time, become a little muddled. On the flip side, when the larger engagements happen Esslemont shines in capturing the tension and drama of a battlefield.

Overall this was an enjoyable story but, mainly because I don't feel vested in any of the characters yet, I didn't get into it as much as I have the more recent Erikson novels. Fortunately, Esslemont has set the stage for some far reaching story lines that should prove to be quite interesting.