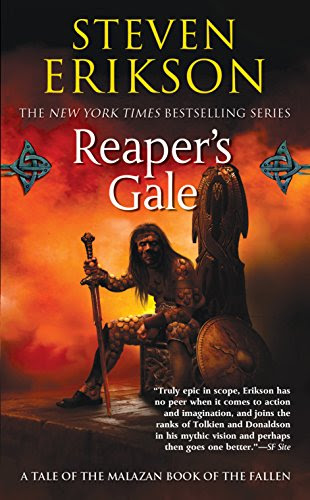 Man I want to say how much I liked this book but I can't. In fact as a book that started with the most promise it seemed like the biggest let down of the series so far. I'm actually quite disappointed.

Within the prior couple of books a momentous confluence of people and power were scheduled to meet in Lether and, in a way, they did. However, the explosion that I was hoping for just never seemed to happen - it was more of a misfire than a cusser blast.

Don't get me wrong; some of the book was very good it's just that in so many ways this book seemed to cop out. Two characters who were heretofore considered dead were brought back to life while other, just as interesting characters were introduced buy then neglected. Overall the whole book seemed to flounder around in a way that seemed designed just to keep the climactic fight between Karsa and Rhulad at bay for another hundred pages. Each time it seemed like the fight should happen the tale was pulled off on some other tangent leaving me hungry for main course of their battle while wallowing in the brussel sprouts of some some-what boring tangential stories.

Enough with my gripes though - I suppose I should also give some time to the parts of the book I enjoyed. The Malazan Army is just as interesting as always; if not more so now that a few new characters have joined Fiddler and his group of marines. Likewise, some of our long standing characters such as Quick Ben and Fiddler are even more interesting now than they were before this installment. Quick Ben has always been one of my favorite characters but he is now pushing close to being in the top three (Karsa, Kalam, and now Ben). I am anxious to see a full unleashing of his powers at some point. What can't this guy do?

I don't really want to talk about Karsa much which, at least in this, the book and I agree on. There was a lot of interesting potential for Karsa going in but he seemed neglected as an after-thought. However, Icarium (who seems like on scary bad-ass) got a bit more attention and the more we learn about him the more bad-ass he seems. I figure anytime the world recoils at his touch alone he must be pretty freaking impressive; I just wish we could get a better feel for exactly what he is capable of.

My favorite part of this book though, above all else, was the death of a handful of characters I really didn't like. In some ways Erikson used death clumsily leaving me wondering why some side-stories were even included. However, in other's, if nothing else he took pity on me and removed some really annoying people from the tale. The only death I truly felt frustration for was the final one in the book. It came as a shock and was a bit disappointing in it's simplicity. However, with Erikson's penchant for bringing people back to life perhaps this death wasn't as permanent as it appeared.

Even though this was my least favorite book in the series it was still an entertaining jaunt through the world of Malaz. It just failed to live up to my preconceptions on what should have taken place and when. Thus it is hard for me to fault the novel too much in a final grade.