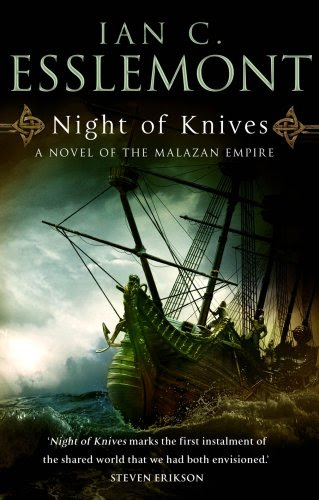 Over the weekend I grabbed my paperback copy of Ian Cameron Esslemont's "Night of Knives." I had just finished reading "Reapers Gale" the 7th book in the Malazan Book of the Fallen series and wanted a little more (I don't own Toll of the Hounds yet).

According to the preface Erikson has been waiting a while for Esselmont to enter the fray with his own contribution to the world of Malaz. While the story itself was enjoyable in some ways it seemed to be rushed out. The type was large and the margins were wide. In fact, "Night of Knives" seemed better suited as a short story added to a compendium than a stand alone novel.

I had hopes, going in, that I would learn far more about Dancer and Kellenvad but this book doesn't really deliver much in that regard. Instead the story is told from the perspective of two other people; Temper, a semi-retired bodyguard of Dasseem, and Kiska, a non-commissioned spy for the local Malaz govt and part-time thief.

Temper, after having survived a horrid battle at Y'Ghatan and the subsequent political maneuvering ended up hidden as an old guard in the garrison at Malaz isle. His sense of duty drags him out and back into imperial machinations on a rare, and feared night - a nigh of the moon. Kiska, on the other hand, goes out on that same night out of curiosity and a desire to find more for her life than just Malaz island.

While we, the readers, do see small snippets of Kellenvad and Dancer they are small nuggets without much value to the grand story drawn out for us so far in Erikson's books. However, now that we have met Temper and Kiska it is my hope that both pop up again in other novels. Temper seemed familiar to me going in so perhaps I have already met him in one of Erikson's books but I didn't pay him much attention. Likewise, perhaps Kiska has also been around and I've just failed to take note of her. Either way both characters are interesting and well written.

One thing I can say is that Esselmont does a good job of capturing the feel of Malaz that Erikson has already created. I didn't really feel like I was reading someone else's work (even if the word potshards doesn't appear once in this book). As far as a collaborative work goes "Night of Knives" is a winner.