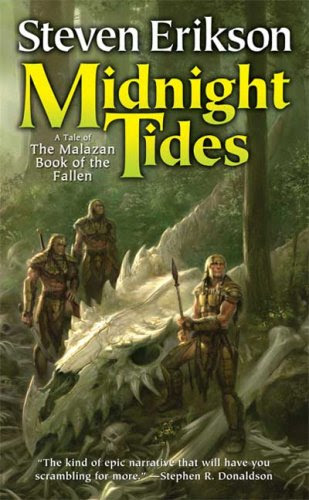 I just realized I haven't put any sort of write up about this book at all. I've been remiss! It's actually kind of amazing how many books I've read since I read Midnight Tides so hopefully I'll do a decent job of recollection.

In this, the fifth book of the Malazan series by Stephen Erikson, we travel to an entirely new continent where we are introduced to the tribal people of the Tiste Edur and the greedy, Letherii empire. As with all of the novels so far there is no clear cut good and evil group. Instead there are just various shades of gray where each nation seems to wax and wane between the two extremes.

To be honest I didn't really dig this book that much when it started. I had just spent the prior four books getting to know so many different characters across such a vast expanse of world that I was unprepared to learn about new cultures and even more "critical" characters. However, the Sengar family of the Tiste Edur, and all of their dysfunction, eventually won me over and I really started to get into the flow.

Likewise, down in Lether, the incomperable Beddict family really intriqued me including the character of Tehol Beddict specifically. Tehol is a bit of a financial genius and he is accompanied by a servant of endless patience in Bugg. Of course, as with all things in the Malazan novels there is more to each character than we are intially led to believe and both the Sengar and the Beddict families are no exception.

This book also spans a huge chunk of time by starting with a story from ages past when Scabadari (leader of the Tiste Edur) and Silchas Ruin (the leader of the Tiste Andii) fought in a huge battle up to the more present day war between the Edur and the Leterii along with the ever present involvement of the Crippled God. If there is one thing you can say about Erikson it is that he isn't afraid of scope.

This story also offered me my frist glimpse of the Crimson Guard. In a world populated with an endless amount of total badasses the Crimson Guard seems like they fit in perfectly. That little taste is enough for me to want to read more about them and I will, eventually, once I get into Erikson's partner's books - The Novels of the Malazan Empire authored by Ian Esslemont.

Thus, even though this book started off a little slow by the end Erikson had won me over again.