The Bonehunters (Malazan Book of the Fallen book 6) 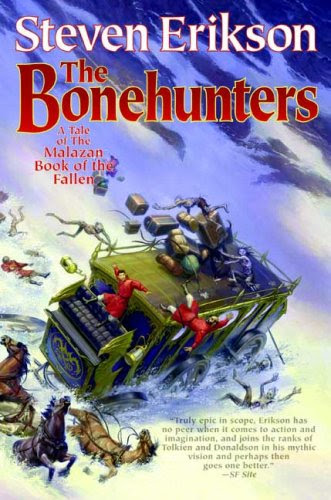 I read this book while I was in Cleveland for Christmas and I have to say it was, possibly, my favorite book in the series. The overall pacing and the events in general just really appealed to me. Add in to the fact that one of my favorite characters, Kalam, got to be a bad-ass and how could I not like this book?

The book takes its' title from the events within concerning the Malazan empire and their war across the Raraku desert involving their persuit of Leoman of the Flails and the subsequent battle at Y'Ghatan that they take part in. The battle is the first chance for the 14th Army to fight and they are ready to go. However, their opponent isn't quite as keen and the battle he plans for them is like none they would have ever imagined.

Simultaneously Ganos Paran has left the Azath house and is back in the world pursuing his own plans; some of which are, quite simply, confusing and seem to border on the insanely reckless. However, as crazy as Ganos is you can't help but appreciate how central to the entire series his character (hell, his family) is. It will be interesting to see how his actions in this book effect the rest of the series. Undoubtedly the consequences will be both vast and a bit surprising.

Considering I mentioned him in the beginning of this post I feel I pretty much have to return to him, Karsa. Karsa is about as bad-ass as a character can be. Truth be told when he was first introduced I didn't like him at all but, as the books have gone on, he has slowly evolved into my favorite character. He is brutal and seemingly invincible but not impervious. On the flip side he is funny and completely straightforward and his story arc in this book just accentuates all of these facets of his character. I'm not convinced I'd be entertained by an entire book featuring him but, of all the Malazan characters, his is the only one I think I'd enjoy in a stand-alone work. My only complaint with him maybe that he is too powerful. Of course, knowing Erikson, that just means there is someone even more powerful lurking around waiting to kick Karsa's ass - and that it will happen.

The book in my mind is the worst so far in the series, perhaps the worst book in general that i have ever had the displeasure of reading. The main story line moves at a snails pace due to the authors habit of going off on a tangent with every turn of the page. The pages are filled with many a worthless stories that to all appearences have little if anything to do with the main plot. And some of the characters are completely usless such as the malazan artist and his frog companion. What the hell do they have to do with anything. All in all if i were the editor i would have shaved this book from its original 1200 pages to around 800. I have never not finished a book but this one is sorely pressing my patentience and will.