The War of the Flowers 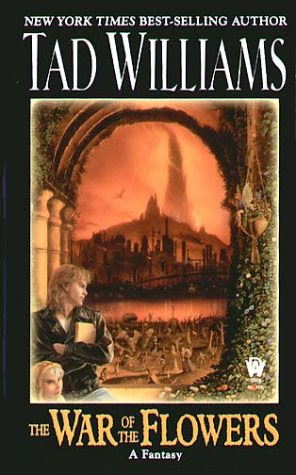 I generally like the works of Tad Williams so I entered into this book with a pretty positive outlook. This book is a fine example of his style of writing but there are still many differences between this tale and the other books of his that I have read.

The War of the Flowers is a story about Theo Vilmos, a 30 year old has-been singer, who suddenly finds himself in the world of faerie. Faerie, in Williams mind, is nothing like the faerie of legend; instead it is full of strife and inequality where the elite, those in the Flower families, hold absolute power over all other magical creatures in the land.

Theo is not your normal fantasy protagonist. He is very, very reluctant and not particularly battle hardened. Amazingly, even by the end of the book he isn't much of a hero. He doesn't go through any of the typical fantasy maturation processes where he becomes a powerful mage or a master swordsman. In fact, at the end, he is just a more mature Theo Vilmos.

Even though Theo is burdened with incredible ignorance about his situation and confronted by characters who aren't particularly patient with his lack of knowledge, he manages to bumble through and not get himself killed; even when he is the number one target of the most powerful of the Flower families, the Helleborne's. At times his ability to escape various situations seems overly forced and contrived but, overall, it doesn't hurt the story too much.

Theo is helped in his escapades by a smart-assed little sprite named Applecore and Cumber, a loyal lab assistant, plus a lot of luck. It was a relief for me that Theo got some luck in Faerie because the first three chapters are full of bad luck for our hapless hero. If Williams can do anything well he can build up sympathy for his main character. I was ready for anything good to happen to Theo by the time Chapter 4 rolled around.

While I did enjoy this book it was my least favorite Williams novel so far; if only because Theo was so self-pitying for so long. Furthermore he seemed fairly slow-witted when he was earlier described as being fairly bright (but unmotivated). Overall the story doesn't hold any suprising twists or turns but it was still a pleasant day-long diversion. It was also nice to be able to read an entire story in a single book when fantasy is so often cluttered with multi-volume epics.