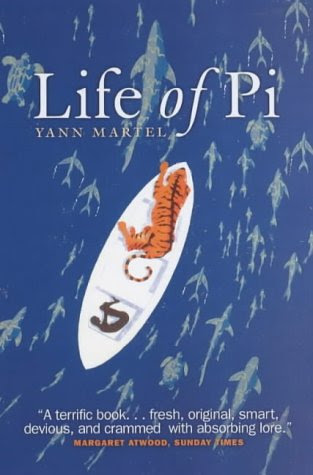 I finished up the book, Life of Pi, last week and overall I really enjoyed it. The story is about a young boy whose family decides to emigrate from India to Canada. The family owned a zoo in India and because they were travelling with some of the animals that they sold to zoos in North America they travel on a cargo ship.


Initially the voyage is uneventful, but eventually it sinks and the main character, Pi, barely manages to escape to a life boat. At the same time that Pi finds his refuge a large bengal tiger finds safety in the same boat. A few other animals make it to the boat as well but with the tiger on board the dinghys crew quickly shrinks back to two, Pi and the Tiger. The rest of the book is about the voyage and survival of both Pi and the Tiger.


The entire voyage is quite remarkable and seems fairly unbelievable - much like the stories of religion. I only mention this parallel because as it turns out Pi is also a very spiritual boy who considers himself Hindu, Muslim, and Christian. While that trifecta may seem like a strange combination Pi's logic makes it all seem entirely reasonable. One of the marketing blurbs for the book says "..a story that will make you believe in God.." I don't know if the spiritual message is that strong but, at a minimum it does get you thinking. Something that few books have managed to do to me in a long time.


The book is pretty short, written in the first person (generally), and overall was an excellent tale. I give it a thumbs up
.
RATING 4
Posted by Unknown at 11:05 AM

Email ThisBlogThis!Share to TwitterShare to FacebookShare to Pinterest
Labels: 4, bestseller