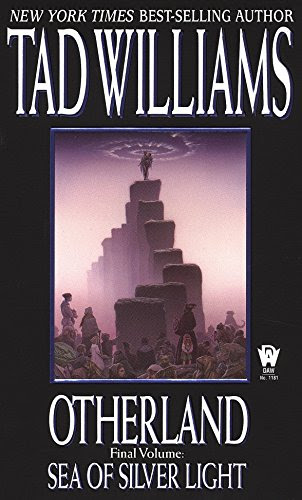 When it comes to the geek genres I definatly prefer fantasy to sci-fi. However, some science fiction has really entertained me over time such as Ender's Game by Orson Scott Card (I can't really speak too highly about the more recent sequels about Bean). Another such entry into the sci-fi genre that I have enjoyed is the Otherland series by Tad Williams. Otherland is a virtual world were earths wealthiest businessmen plan on transferring their souls and living forever.


Sea of Silver Light is the concluding chapter in the Otherland saga and I have to say it wasn't as good as the first three books in the series. I still enjoyed it but something about the way it ended just seemed kind of hollow and lacking to me. I don't want to spoil the storyline so I won't say anything more about that. What I will say though is that the Otherland series is great as a whole. The story is cool and shows a very believable not too distant vision of our world, the net's place in it, and how our lives will be permeated by the incredible levels of access to information we may all have someday.


I don't know if I liked this series as much as his fantasy series Memory, Sorrow, & Thorn but it was still a good read.