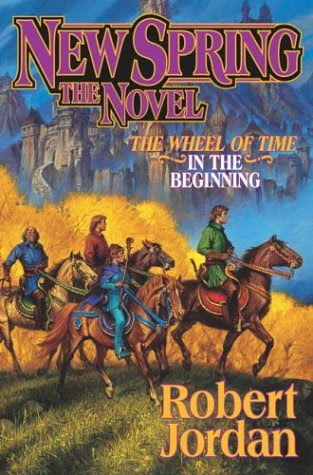 "New Spring" the prequel novel to the Wheel of Time by Robert Jordan tells the story leading up to the birth of Rand Al'Thor. I had previously read the short story of the same name in the Legends Compendium and didn't really plan on reading the full novel. However, someone bought it for me as a Christmas present. I'm glad they did.


It was much shorter than any of the other novels in the Wheel of Time series (that I can recall) but was really very good. It provides some of the back story surrounding Suian, Moiraine, and Lan. In particular it focuses on how Suian and Moiraine came to be searching for the Dragon Reborn and how Lan became Moiraine's warder. Unlike in the majority of the Wheel series Jordan doesn't become swamped under by too many details. Generally I don't mind the incredible level of detail Jordan gets into but the stark contrast evident in New Spring was pretty refreshing.


Overall, the story flowed along nicely. It was almost like I had just discovered Jordan's work again. I actually stayed up late and kept reading until I was done; something I haven't done since book 3 or 4. The next chapter, Knife of Dreams (Wheel of Time, Book 11), had the same effect on me. If you haven't read any of the Jordan series before I suggest you be careful before you do. Obviously (since we are waiting on book 12, not counting New Spring), the series is LONG. Not only that but each book is LONG. So reading the series is a commitment. Personally, I think it is a worthwhile commitment - but it is a commitment nonetheless.