The Knife of Dreams 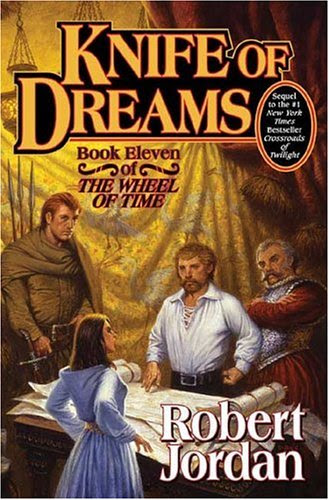 Folks who have read all of, or just part of the series, know that Jordan likes to write. Some accuse him of liking to write so much that he just adds more words to each book in order to force the series into more books that it warrants. It is true that his descriptions of clothing, hair pulling, sniffing, and the general topography can get tedious at times. However, in general, his attention to detail is as much his greatest strength as it is his second greatest weakness.


It is almost universally agreed that books 1-4 of the series are great books however many feel that books 5-9 are full of boring dredge. I won't argue that books 5-8 aren't as exciting as 1-4 because quite frankly, taken as a whole, they aren't. However, they are, in my opinion, just as important to the story as 1-4. Those first books really build up the excitement of the series and give you a deep introduction to the main characters (though many of the Forsaken do remain virtually unknown beyond their name). However, the middle books pull the series into a more global perspective than I think anyone has done in a fantasy epic before. The events transpiring in The Wheel of Time truly are global in consequence and as such they affect many nations; not just that nation which the main protagonist is from. The main continent consists of many kingdoms. I define the main continent as anything south of the Mountains of Dhoom and east of The Spine of the World. Beyond this main continent (often dubbed Randland for the main character) there is Seanchan, the Aiel Waste, Shara, The Isles of the Sea Folk, and Tremalking (plus who knows how much more). If Jordan (aka James Oliver Rigney, Jr) didn't really dig into the political and social upheaval associated with the coming of the end of the world - well I would feel ripped off.


The last 3 books (9-11) have all been very good as well. In fact, I am inclined to say that I like book 11 as much as any other (if not more so) in the series. It was fantastically exciting, full of surprises (and not-surprises) interesting twists, and plenty of evidence the Tarmon Gai'don (the last battle between dark and light) is rapidly approaching. It is also strong evidence that the series is finally ending. The series will end with book 12 (sadly, not written by R.J. who passed away last year). I still can't wait for that to be released. My only major gripe about this installment, as always, is the cover art by Darryl K Sweet. I can't stand his manner of drawing people.


I'm not all fanboy of the series though. There are many things about it that nag at me and I will post about them once my younger brother Joe has caught up in his reading. I don't want to provide any added influence to his reading.