House of Chains (Malazan Book of the Fallen Book 4) 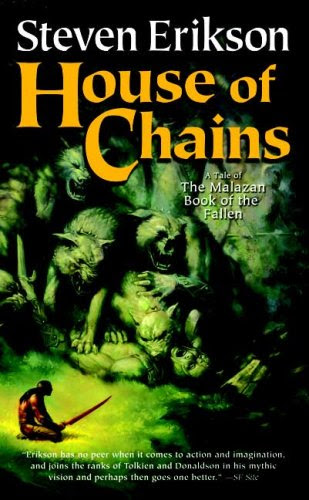 In this, the fourth book in the series, we start out getting to know a Toblaki. That "race" may seem familiar if you were paying attention in Deadhouse Gates. When we first met Sha'ik and her two body guards; if you remember one of those was a large Toblaki warrior. Well, as it turns out it is this very same guy, Karso Orlong, who opens the House of Chains.

Honestly, I didn't like this guy at all but as the book got further along he slowly became a great character. Perhaps my favorite of the series so far. It doesn't hurt that he is a complete bad ass who pigheadedly won't back down from anyone; even when he should. Of course, like all of Eriksons characters we always seem to meet at least one guy who is even tougher than the guy we think is the toughest and the case is no different for Karsa - I'd love to know more about this lightening fisted fried/foe of the Toblaki!

This book isn't all about Karsa though he does play a key role in it. Instead, it is really about the new house that was unveiled in the deck of dragons the House of Chains and it's master, The Crippled God.

As an aside we also are treated to the long awaited confrontation between Tavore and Felesin and the armies of Raruku and the Malazan forces. I won't say much about this other than the way it all works out is a bit different than I envisioned going into the book.

With all the killing and violence that has occured in the prior books this one has the most graphic scene I have encountered in a book in quite a while and I was glad to see it - the ghastly death couldn't have happened to a better character. Again, I don't want to spoil any of the plot but trust me, when you encounter it, you'll know what I'm talking about. Pure poetic justice.

Much like Karsa I didn't like this book much when it first started. I was thrown off by the sudden focus on a new character in a new part of the world. However, as the book progressed I grew to really like it, and, just like with Karsa, I think it is my favorite of the series so far. A whole bunch of small bits and pieces came together in this book that had been alluded to in the prior installments in the series and it was cool to see how he tied everything together.

I had been told that he loved to leave little hints about the future, bits of foreshadowing and what not, all over the place but I didn't really appreciate that until this book because this was the first time those connections were actually being made.

While Erikson still doesn't do much in terms of direct descriptions of people or places he does manage to subtly give you a lot of details on various characters and nations. In fact, I could easily see myself reading books that just focused on certain groups such as the tribes of the Toblaki or the Moranth. He has hinted at so much about these people that it would be cool to really dig into their cultures and histories.

At the moment I have my hands full just reading what he is writing. It isn't hard reading but I'm way behind in the series and have to catch up. Plus I really want to know what happens with Karsa and how his early actions in this novel will effect later episodes in the epic about Gods and the Malazan Empire.
Posted by Unknown at 11:17 AM