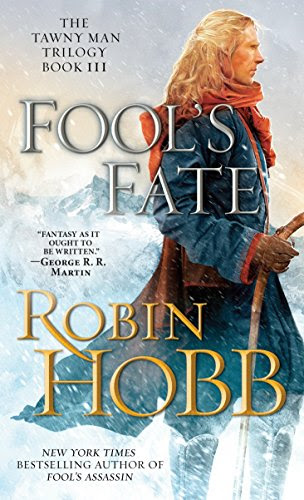 If you haven't known I generally like fantasy novels. Fantasy in the likes of The Hobbit or The Wheel of Time (not adult fantasy; which I would probably like, but that's another post all together). Robin Hobb's Tawny Man trilogy is a quality followup to an excellent series she wrote back in the 90's about a young Assassin named FitzChivalry Farseer; the bastard son of the eldest prince at Buckkeep castle.


I don't want to get too far into the other books in this rating but I figure you needed a little bit of background information. The older series deals with the development of "Fitz" from boyhood into young adulthood as well as the budding of his friendship with "The Fool". The Fool is a critical character however we don't fully understand his value to the storyline until this newer series which chronicles the life of Fitz once he is a middle-aged man.


The newest series details how Fitz is torn from his life as a hermit and thrust back into the intrigue that surrounds the life of nobility at Buck Castle. Fitz's friendship with The Fool is further explored and their deeper, more meaningful, relationship is revealed. No, this isn't some sort of homo-erotic story with left leaning underpinnings. What it does deal with is the deep brotherly love of the two protagonists and how their bond comes into play in dealing with the evil antagonist.


Fools Fate is the final book in the series, and undoubtedly the last book about Fitz. It is a pretty good story written by an author who knows her craft very well. If you have followed the series you can't help but care for the outcome of both The Fool and Fitz as well as the myriad side characters who have added color and depth to the tale.


While there are a few things I could pick in the book they are generally all so minor they aren't worth quibbling over. My only substantial gripe was the ending seemed pretty rushed and slammed together to make all the loose ends tie up nicely. Almost too nicely.


Overall the story is quite good. It explores quite a few deeper issues by having Fitz be introspective, examines the value of a variety of relationships, delves into intrigue and deceit, and even brings in some of my favorite characters from the earlier books. If you are a fan of sci-fi/fantasy and you haven't had a chance to, I suggest you check out the Tawny Man trilogy and the Assassin Series by Robin Hobb.