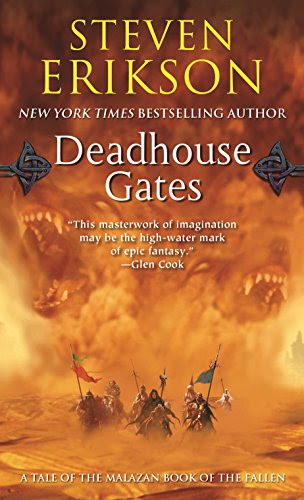 Deadhouse Gates picks up right where Gardens of the Moon drops off. The siege of Darujhistan is finished and the Bridge Burners have separated. This book follows the path of Fiddler (engineer), Kalam (assassin), Crokus (Thief), and Apsalar (fishergirl/assassin) as they head back to Apsalar's homeland to return her to her father.

While the group travels across the world we also meet two new characters, Icarium and Mappo. Icarium is a Jaghut warrior whose name was introduced in the Gardens of the Moon as a master of time keeping machines. Mappo is a trell warrior who seems to truly care about Icarium while at the same time torn by his duty to his own people. Eventually Mappo and Icarium join up with Fiddler, Crokus, and Apsalar where we learn even more about Icarium and Mappo's long standing relationship.

As Fiddler and his group travels they separate from Kalam as they approach the land of the Seven Cities. Fiddler, Crokus, and Apsalar have their own collection of troubles as they try to skirt the desert of Raraku while Kalam heads directly into it while trying to deliver a book to a mystical woman named Sha'ik - the delivery of the book is set to trigger a rebellion against the Malazan empire. Unbeknownst to Kalam though he is being followed by a female warrior of the Malazan Red Blades, Lostara Yil, and a master assassin named Pearl whose job it is to stop the rebellion for occuring. After Kalam passes through Raraku he picks up a demon bodyguard and then ventures toward the heart of the Malazan empire in an effort to assassinate the Empress herself.

While all this is going on we also follow the story of young Felesin Paran, youngest sister of Ganos Paran whom we met in the Gardens of the Moon. Felesin's older sister Tavore, has taken on the role of Adjunct to the Empress which was left vacant at the end of book one. It appears that Tavore sacrificed her sister to a life of slavery in a mine far away. Felesin, along with two companions, Heboric and Baudin, go to the mines and attempt to ally with either in order to better survive. Heboric is a fallen high priest of the God of War, Fener while Baudin is far more than he seems.

Meanwhile the people of the seven cities can feel their rebellion is about to start and it does in earnest. The Malazan forces are led by a military mastermind in Coltaine but he is encumbered by the thousands of civilians he has to defend that have been forced from their homes by the rebels. Coltaine is also hampered by the fact that he has to move his forces and the civilians thousands of miles across the desert to the nearest reinforcements.

As you can see this is not a simple story but rather many told in an interweaving pattern. I'm actually in the middle of the fourth book in the series as I write this review and it has been cool to see a lot of small references tide back into things that happened in this book. A lot of bits and pieces that really seemed insignificant here actually prove to have far greater significance later on.

I really enjoyed Deadhouse Gates even though at times it was a little slow. It, along with the third book, Memories of Ice, serve as a great bridge into the later books. I highly recommend it