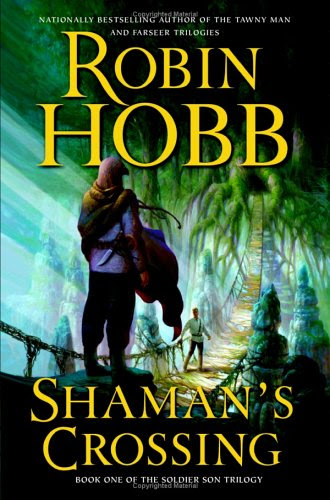 I bought this book, and the second book in the series Forest Mage, at the same time about a year ago but just finally settled down to read them over the past two weeks.

The story is set in an unusual world for a fantasy novel. While the main characters still have the typical euro-centric feel to them they aren't the dominate force in the world. Instead a nation that is never really touched on much, called the Land Singers, dominates the worlds military. The protagonist Nevaree Burville, is a Gernian. The Gernians were forced west, away from their sea ports towards a much harsher landscape knows as the plains.

The plains are populated by various savage tribes that resented the encroachment of the Gernians. However, the plainsmen were soundly defeated in an earlier war that Nevarre's father fought in. Nevarre's father performed so well he was able named a noble by the king; a rare move that has caused some resentment with the existing nobles.

The Gernians remind me a lot of Spain during their explorations and colonizations. The nation is very strictly religious, in this case the Gernians worship the Good God, as opposed to the various old Gods that still have a minor grip within Gernian society. The Good God decrees that the first sons purpose in life is to inheirit and take over for his father, the second son must be a soldier, the third son a priest, and the fourth son an artist of some sort. Nevare, like his father is a second son, and thus is destined to serve in the military.

Nevares father takes his duty to the Good God very seriously and strives to raise each of his sons to the roles alloted to them by their birth order. He is hard on Nevare as a boy and expects him to carry himself with a strong military bearing at all times. Sadly, however, Nevare is a bit of a whiner and a coward. He never whines where his father can hear him but, since the story is told in a first person, past tense, perspective, you the reader get to hear all of his whining; and let me tell you it really wore on me after a while.

Nevare seems to be a good enough guy - he's wants to do what is right, he has empathy for other people including the plains people and the remote "specks" who live in a deep forest on the western side of the plains, and he truly seems to want to embrace his life as a solider and make his father proud. The only thing is he can't catch a break; he reminds me a bit of Fokker, Ben Stillers character in Meet the Parents - nothing he does seems to be the right thing. Instead his life is constantly awash in misery and he whines about it Tediously.

Because of all of Nevare's whining I just couldn't like him. Not liking the main character at all makes it tough to like the book. In fact I barely finished it and I only managed to finish it by skimming a lot of relatively boring details that Ms Hobb included.

This isn't to say there was nothing about the book I liked; in fact there are a few characters that show great promise and likability. Nevare's friend Spink and Nevare's cousin Epiny are both pretty interesting and quite likable - I would have preferred to have heard their stories. Likewise, Nevare's father and his adventures in the war would have been great to read. Instead we get an entire story about Nevare growing up to be a soldier and then going off to the Cavella (Cavelry) Academy his father helped found. It's really quite boring.

There are some highlights in the book that suggest the world could be so much more interesting. The magic system of the plainsmen has a weakness against Iron but we don't really know what the source of the magic is (beyond a frog that can cause hallucinations). The Specks to the far west also show some interesting promise as does the magic of the mysterious "tree lady" that Nevare encounters in a frog induced hallucination. However, none of that is ever really developed during Shaman's Crossing. Instead Hobb keeps hinting at them with frustratingly similar passages over and over again.

To make life simple I'm going to rate books on here with the arbitrary scale of 1-5 where 5 is the best. This book, Shamans Crossing, eeks out a 1.5 - the main character is annoying, the story develops very, very slowly, and alot of the details don't add to the story at all, they just bore the reader. Hopefully Forest Mage is better!

The premise behind the books really intrigued me and, considering I had enjoyed earlier works by Robin Hobb, I felt pretty secure in buying two parts of the trilogy up front.
Posted by Unknown at 8:48 AM

Email ThisBlogThis!Share to TwitterShare to FacebookShare to Pinterest
Labels: 1.5, fantasy