Gardens of the Moon (Malazan Book of the Fallen Book 1) 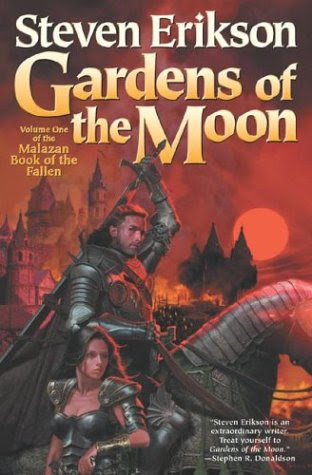 This series seems to be on the tips of everyone's tongues now a days yet, somehow, I missed it's coming and have just now begun to read it starting off with Gardens of the Moon and I have to say it is a bit different from anything I have read before.

The style of the writing is different; it's more of a free thought type of expression even though it is far too complicated of a world to be something that wasn't planned and outlined before it was written. Steven Erikson has a knack for making his writing seem effortless for him while at the same time requiring some effort on the part of the reader to keep up with what he is talking about.

Right off the bat the reader is introduced to God like beings as well as a poor fisherman's daughter and an old crone. You might think, based on that motely cast of characters that not much excitement would be coming your way but you'd be wrong. Instead the reader is thrust into a dark world where Gods play at war and many of the mortals seem to be nearly as powerful as the dieties.

Basically, there is ass-kickin-a-plenty throughout the story. In fact, even when there isn't an action packed scene it feels like action is never more than a page turn away. Along with all the action you meet a lot of characters. Without reading the book then you might be able to guess that a lot of details and backstory are never presented and instead are left for the reader to imagine independently. Amazingly enough this works becuase Erikson gives just enough details about history or the magic system to seed your synapses and to put them in overdrive.

My friend Ed describes the litany of characters pretty well; Once you find a character who you think is as bad ass as they come, another character will pop up and leave you thinking, wow this new guy could kick that old guys ass - easily! Then, once you reach the tip top of the power structure he has to fight someone who he considers his match. It's pretty crazy and in that vein alone guarantees that this series is not intended for those purists who don't like uber-characters.

Quite frankly I really enjoyed the book. I was warned it was one of the slower books in the series and that it took a few hundred pages to get into it but almost from the first paragraph I was digging the story. There were at least 7 characters I really liked; Whiskeyjack - the bridgeburner (combat engineer type group) Sergeant with a lot of secrets, Sorry - the fisher girl after her encounter with the Gods, Tattersail - a female mage with more power than she realizes, Fiddler - a sapper (demolitions guy) with the bridge burners, Kruppe - the stereotypical pudgy happy guy who is more than he appears, Crokus - a thief who takes chances, and Rallick Nom an assassin with a higher purpose. Plus there were a bunch of other characters who were each believable and interesting in their own way.

Erikson walks a fine line between story telling and chaos but he manages to stay firmly entrenched in story telling throughout the book plus he promises you far more in terms of the world and the people who inhabit it in the books to come.

This book scores a 4 on my scale of 1-5 with five being the best thanks to tons of action, a compelling world and magic system, and a cast of characters that I can both identify with and care about (either like or hate).
Posted by Unknown at 9:50 AM