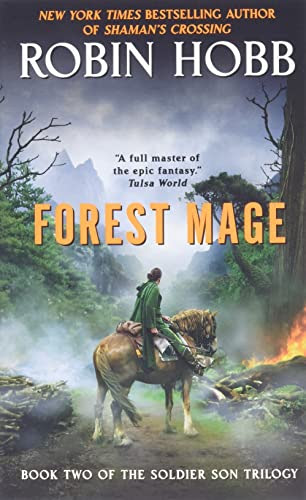 Forest Mage is the second installment of the Soldier Son Trilogy by Robin Hobb. In this sequel to Shamans Crossing Nevare Burville's story picks up at the end of Nevare's first year at the Cavella Academy. The strange magic that infested him in the first novel has been ignited by his encounter with the speck plague and it is having an unusual effect on him.

The growth of the magic within him and all of his efforts concerning it, result in the same bad "Meet the Parents" type outcomes that he dealt with in the entire first book. In the Shamans Crossing we followed Nevare on his travels to the east and in Forest Mage we follow him in his travels to the west.

Some of my favorite characters from the first book are still around such as Spink and Epiny though we run into them both much later in the story and Epiny has a mostly tangential presence in the novel until the end. In fact, instead of developing the realtionship between Nevare and anyone else the majority of this book, much like it's predessor, is spent in Nevare self pitying mode.

His life sucks - we get it. He doesn't know what to do to fix it - we get it. People are sickened by his obesity - we get it. In fact I'm not sure why Hobb felt it was necessary to hit us over the head with all of these points over and over again throughout the book.

Nevare is a pawn of the "magic" the mysterious mystic force of The People (what the specks call themselves). He is supposed to do something that will stop the "war" between The People and the Gernians - though the Gernians don't really know they are at war. The magic never really wants to give Nevare a hint as to what it is he must be doing - nor does it really put The People at ease and let them know it has the problem taken care of. Instead The People continue to spread the plague and use the magic however they can against the Gernians and Nevare sits around in a shack or has sex with a Speck woman throughout most of the book without ever actually even thinking about his predicament or trying to deal with it.

Nevarre is either the most stubborn and whiny person I have ever read about or he is deluded and refuses to accept the reality of his situation. Either way he doesn't make for a compelling protagonist. Even when he does things that are likable (he's a hard worker) he still comes across as self pitying and whiny. The magic doesn't help considering it conspires against him to make him seem like the biggest loser to ever wear the title of "hero".

Even with all the negative I found with this book it was better than Shamans Crossing. Nevare didn't whine quite as much and I got to meet 2 more interesting characters that I actually liked (his "love" interest, Amzil, and a scout, Buel Hitch). By the end he is finally forced to make a decision about his own life instead of constantly living his live as the Good God or his father want him to. Of course it could be said he still didn't make the choice and that the "magic" made it for him.

In the end I'll give this a rating of 2 on a scale of 1-5 with 5 being the best. I'll still read the third book, Renegate's Magic - it just might be a while before I sit down and do so.
Posted by Unknown at 9:21 AM