The Devil in the White City - Murder, Magic, and Madness at the Fair that Changed America 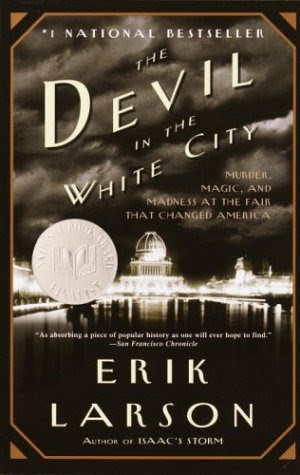 Some say that truth is stranger than fiction; while I don't know about that I can say that at times, such as in the reading of The Devil in the White City, truth is more compelling that fiction. Thanks to Hollywood and the crazy killers found throughout the history of fictional thrillers it is easy to be jaded when your presented with a smooth talking pharmacist who preys on young women. It is easy to not be horrified until you remember the story is real.

The Devil in the White City is really two stories in one. The first is about Danial Burnham; the man who was behind the most miraculous of events in Chicago's history when it won, prepared for, and then put on the Worlds Fair of 1893. The author, Erik Larson, does a fantastic job of taking you on the highs and lows of the process of building a (white) city within the dingy city of Chicago while at the same time telling a much darker tale. The darker tale is one of ruthlessness and depravity when America's own version of "Jack the Ripper", Dr. H. H. Holmes, stalked the neighborhood around the fairgrounds killing young women by night but serving as a Pharmacist during the day.

This book is methodically researched and written in a style that flows as well as the best of novels. In reading the book I grew to care about the great fair and it's impact on Chicago. I also came to detest Dr. Holmes and I followed the trail of his own hunter with more and more anxiousness awaiting his capture.

In addition to the fascinating stories of Burnham and Holmes Larson tells the story of the city and it's fair. I learned about the Ferris wheel, architecture, and a myriad of other things that go on when putting together and event of such grand scale.

Overall this book is a fine bit of story telling wrapped around actual historical events. It is one of the best pieces of non-fiction I have had the opportunity to read and I can't recommend it highly enough. In fact I give it a score of 5 on my scale of 1 to 5 with 5 being the best.
Posted by Unknown at 6:18 AM